Using Evidence for Governance and Service Delivery in India

Using Evidence for Governance and Service Delivery in India

The need for “good governance” as a bastion for development is promoted by policymakers, development actors and governments across the world. Now a national priority in India, good governance relies upon accountability and sound, relevant data. In other words, the use of evidence for policy.

A half-day conference in New Delhi on 9 February, 2017 brought together experts from government institutions, non-governmental organizations and national research organizations to discuss the use of evidence in informing policy debate and decisions in India, and the gaps that limit the practice of using evidence for policy.

Here are some of the highlights from the event.

Evidence – the what and the how

What is at stake when we speak about using evidence to inform policy? GDN President Pierre Jacquet’s opening question considered the value of evidence in decision making, and its role in determining policy outcomes and impacts. In its most basic definition, collecting evidence is about finding out what works – and what doesn’t – in specific contexts and times, he said. At the fundamental level, evidence is about linking processes with results, helping us to move from a “what” works question, to a more complex and operational question of “how” things work. The latter – although critical – receives far less attention, he argued.

Building a network of champions

Chief Guest, A. Santhosh Matthew, Chair of the Teachers Education Council in the Ministry of Human Resource Development and former Joint Secretary in the Ministry of Rural Development, Government of India, established the need for a strong, unambiguous link between evidence and policy, and introduced some guiding principles on how to get there. Central to these principles, he argued, is the need to “build a network of champions” to take the agenda for evidence-based research for policy forward. Watch the entire keynote address here.

@GDNint @ASanthoshMathew suggests that the use of evidence in policy requires conjunction of 3 things: evidence, champions, and timing

A culture of evidence

In his opening remarks, A. Santhosh Matthew also promoted the need to “build a culture of using evidence” noting the requirement for resources, training and supporting literature as tools to cultivate an environment in which evidence is systematically used by policymakers. To do this, researchers need to be equipped to "spot opportunities" to bridge the gap between evidence and policy, he said.

A. Santhosh Matthew stressed the importance of contextualized, localized research. Research that is not geographically-relevant or context-specific, he argued, cannot inspire meaningful policy decisions or hope to achieve effective impacts.

In the first roundtable discussion, chaired by GDN President Pierre Jacquet, distinguished representatives of government agencies and research institutions shared insights on recent research findings on governance and service delivery in India. Chief Executive Officer at Campbell Collaboration, Howard White opened the discussion raising a point of distinction between “factual” and “counterfactual” evidence. Relating back to Pierre Jacquet’s opening remarks about examining not only “what works” but “how it works,” White suggested that the “what” question must be answered with counterfactual evidence. He encouraged the growth of randomized control trials and experimental studies to test the reliability of particular programs.

Using evidence for policy – the example of the Philippines

Executive Director of 3ie, Emmanuel Jimenez discussed the example of the implementation of conditional cash transfers (CCTs) in Mexico and its wide-reaching effects on CCT programs across East Asia. The Philippines, one of many East Asian countries that has historically viewed social welfare programs with suspicion, was convinced by research demonstrating the successes of CCTs in Mexico to implement and scale up its own version of the program, he explained.

Partha Ray, Professor of Economics at IIM Calcutta and former advisor to the Executive Director of IMF India, drew on his experience as a macroeconomist, and said that survey data is increasingly being used in the field. He outlined the issue of incomplete data faced by macroeconomists, citing the example of national account statistics in India and the problematic coverage of GDP data. Policymakers must use their own judgment to understand what the data is telling them, he cautioned.

Geeta Gouri, former member at the Competition Commission of India (CCI), remarked on the importance of micro versus macro data and its impact on development. A critical factor, she argued, is that regulators require “the kind of [micro] evidence determined by law.”

The law demands a “certain kind of evidence,” she said. “... very rarely do they accept circumstantial evidence.”

She also highlighted the intractability of large amounts of macro data, as seen in national accounts. “They are at such a macro level; you never know what’s happening on the ground.”

Expanding the discussion, Nisha Agrawal, Chief Executive Officer at Oxfam India, raised some insightful points about combining the use of evidence with empathy and emotion when working for social and policy change. She said that while hard evidence provided the basis for advocacy campaigns, there is a need to appeal to human emotion and capacity to empathize with the cause. The figure that the wealthiest eight people in the world own as much wealth as the bottom half of the global population, she illustrated, is both evidence-based and deeply evocative, and has been useful in garnering support Oxfam’s campaign on inequality. 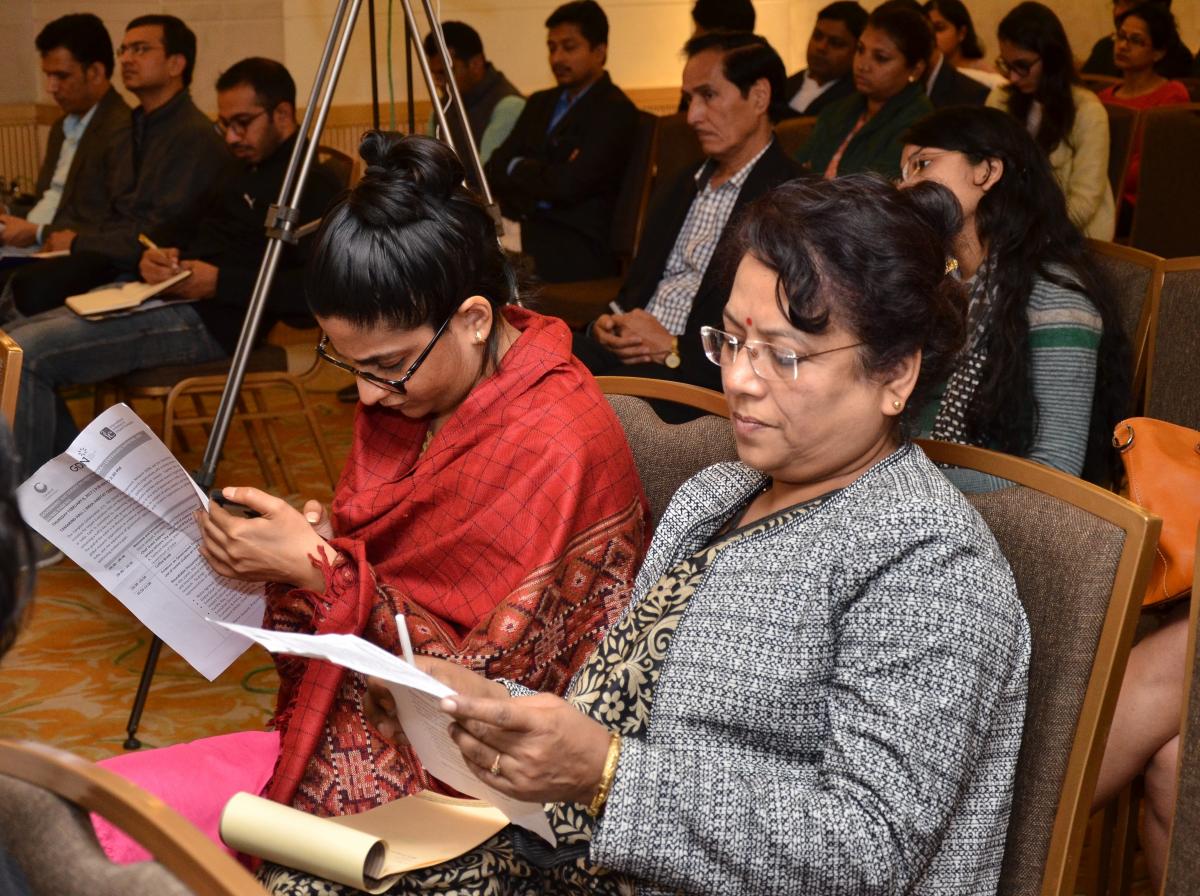 Rounding up your stakeholders

In the second roundtable, chaired by Howard White, Indrani Gupta, Professor and Head of Health Policy Research at the Institute of Economic Growth, and Rohini Somanathan, Professor of Economics at the Delhi School of Economics, discussed cross-cutting research priorities, critical gaps and avenues for collaboration in India.

Indrani Gupta offered insights from her experiences – both positive and negative – of using research in the health sector. An important factor that distinguishes the health sector from others, Gupta illustrated, is that it is largely driven by a wide variety of stakeholders with competing interests, which can either prevent or enable policies from being implemented. To overcome these barriers, Gupta promoted the need for stronger multi-stakeholder collaboration and for governments to partner with autonomous research institutes.

Beware, the politics of evidence

Rohini Somanathan addressed a question from the audience about the ‘politics of evidence,’ where the ability to influence policy is constrained by a need to access ‘inner policy circles’, that can be characterized by glamour and status. However, she is optimistic about the future, due to the willingness she has witnessed from high-level policymakers and researchers to engage in more ground-level discussions around evidence for policy.

Also in response to an audience question, this time from development guru Robert Chambers, Somanathan also stressed the importance of participatory approaches to target government programs. For example, poverty reduction programs can achieve far greater results when targeted through participatory methods, she said.

Emmanuel Jimenez wrapped up the event noting the key highlights from the day’s discussions. Creating an environment in which evidence is used for policy, he concluded, demands a confluence of enabling factors, including high quality, contextual research; multi-stakeholder engagement among policymakers and researchers; and transparency. To do so, he reiterated, will require a network of champions to connect the dots – to close the gap between evidence and policy.